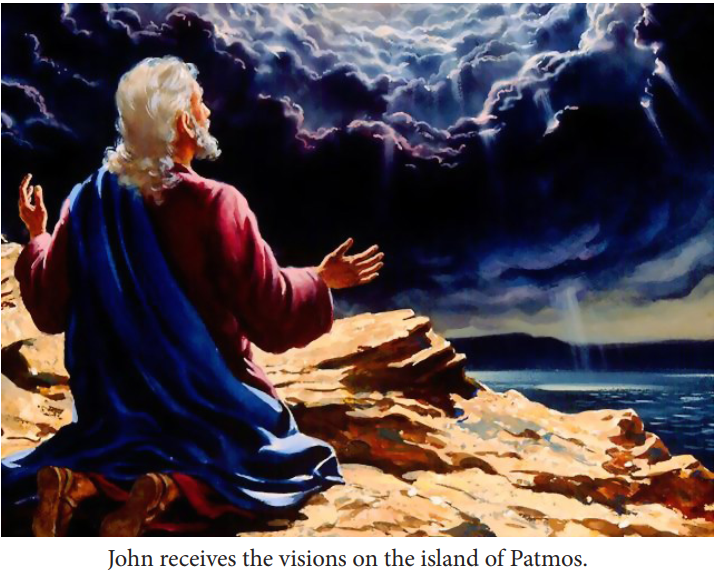 The apostle John sits as a prisoner at the island of Patmos when he receives a revelation of the future in symbolic figures or codes, he writes it
down and it’s called the book of Revelation.
This was given God’s servants, they who had the commandments of God
and the faith of Jesus. They were not to walk in darkness but know what
was going to happen. Jerusalem was destroyed and the survival of God’s
people’s was the main topic. What would happen to them? Would they
even survive?
From the book of Daniel, they already knew they had time-wise come to
the last beast that was shown him. The fourth beast told of in Daniel 7. It
was also the iron kingdom from the statue. The beast would divide into
horns and the iron kingdom on the statue divide into toes and a mixture
of clay and iron. So all that was left in the time of John was the fall of the
Roman empire and then they knew that the division followed was going
to last until Christ second coming. The Jews had for a long time longed
to see the Roman empire fall, and especially also the Christians who had
been treated harshly in the empire. It was, therefore, very relevant to
God’s people.
If we are to find out who God’s people is today we need to follow the line
that has gone all the way from Abraham and to this remnant at the time
of John. And the book of Revelation will explain what will happen from
then on, and here we can follow God’s chosen line with their ups and
downs.
In fact at the end of the book of Revelation, the very last verses Jesus
explain what the book has been about:

«I Jesus have sent mine angel to testify unto you these things in the churches. I am the root and the offspring of David, and the bright and morning star.» (Rev 22:16)

Many think the book of Revelations is about pagans and other nations, but it’s speaking about “these things in the churches”.
Back to Daniel. The part of the vision that still had taken place was that
this last beastly kingdom would fall bit by bit and be divided but then
replaced with bigger danger. Not replaced by a bigger empire,
but a bigger danger.
In the book of Daniel God revealed a pattern in the prophecies. He started with a statue about the empires that would come and have a direct
suppressing role towards Gods people. In Chapter 7 God repeats the
same information about the same empires only with extra information.
In chapter 8 He repeats again information about the same empires however it excludes the first empire that now was gone. He then gives even
more information. In chapter 9, following Daniels prayer for his people,
God one part again with extended information. This information
is said to be especially concerning physical Jerusalem and Daniels Jewish
brethren. In Daniel chapter 11 we get an even closer look at how the empires come to power and how they fall, all up to Christ second coming.
The same system is used in the book of Revelation. God explains over
and over again major things that will happen during the reign of the last
beast and it’s successor and the challenges God’s people will
face. So, just like the book of Daniel, Revelation is a repetitive timeline.
By placing the information on each timeline together we get a full view
of what has happened and the end of it. It’s worth remembering that the
dividing of chapters have been made at a later time and wasn’t in the
original text. The consequence of this is that some verses might belong
to the previous chapter or the other way around.
In the book of Revelation and the first chapter, Christ presents himself as
God and almighty, but also as a high priest. We are told that His, meaning Christ’s people, are the new priesthood and leaders of God’s people.
The same titles that were once given to Israel at Mount Sinai, is now
given to the Christian movement. To the children of Israel at Mount
Sinai:

«And ye shall be unto me a kingdom of priests and nation.
These are the words which thou shalt speak unto the children of Israel.»

and to the Christian congregation at the time of John:

«And from Jesus Christ, who is the faithful witness, and the first begotten of the dead, and the prince of the kings of the earth. Unto him that loved
us, and washed us from our sins in his own blood, And hath made us
kings and priests unto God and his Father; to him be glory and dominion forever and ever. Amen.» (Rev.1:5-6)

That’s right, Revelation reveals that the remnant, Jews who received
Jesus together with converted is the new leaders and truth-bearers and God’s true people. God continues with them and not the other
Jews. They are the new light-bearers. This means that when verse 1 says
the message is given His servants to show them what will happen in the
future, it’s their line and challenges that will be revealed in the book of
Revelation.
Chapter 1 close with Jesus holding the stars of His churches in His
hands. He walks among the seven candlesticks that represent the seven
churches we are about to hear about. This means that these Churches is
His churches and that His care and attention is for them.
It’s especially interesting to note that the revelation of God’s churches
is given on what is called “The Lord’s day”. This day is by many today
claimed to be Sunday, but for those who know the Bible expression there
is only one day that has ever been called the Lord’s day in the Bible,
and that is the Biblical Sabbath. (Isa. 58:13; Matt. 12:8; Exo. 20:10). The
expression the Lord’s day on Sunday was started by the Catholic Church
and has no foundation in Scripture. If The Bible is to explain the Bible
there is no other option. We get another confirmation from the book
of Hebrews where we learn that Christ is the high priest in a temple in
heaven and that the earthly service was a symbol of His service for us
there. What we know from the earthly service was that the priest was to
change the shewbread every Lord’s day or Sabbath. The bread, as well as
being a symbol of Christ, is also a symbol of God’s word. And so Christ
service in Revelation, among the candlestick, also from the Sanctuary,
giving God’s word (bread) to His people takes place on the very day
the priest was supposed to renew the bread, on the Sabbath. We will continue to see in the book of Revelation that we are in fact inside the
Sanctuary in heaven. First the giving of the word, symbolic of the bread,
than the candlestick, then we see the alter on incense and lastly we see
the Ark of the Testament in the most holy. Not only the items from the
sanctuary service is mentioned but also the service of the Priest. And
this is why the Lord’s day is connected to the service that took place on
this day in the sanctuary. The giving of God’s word to Christ churches.