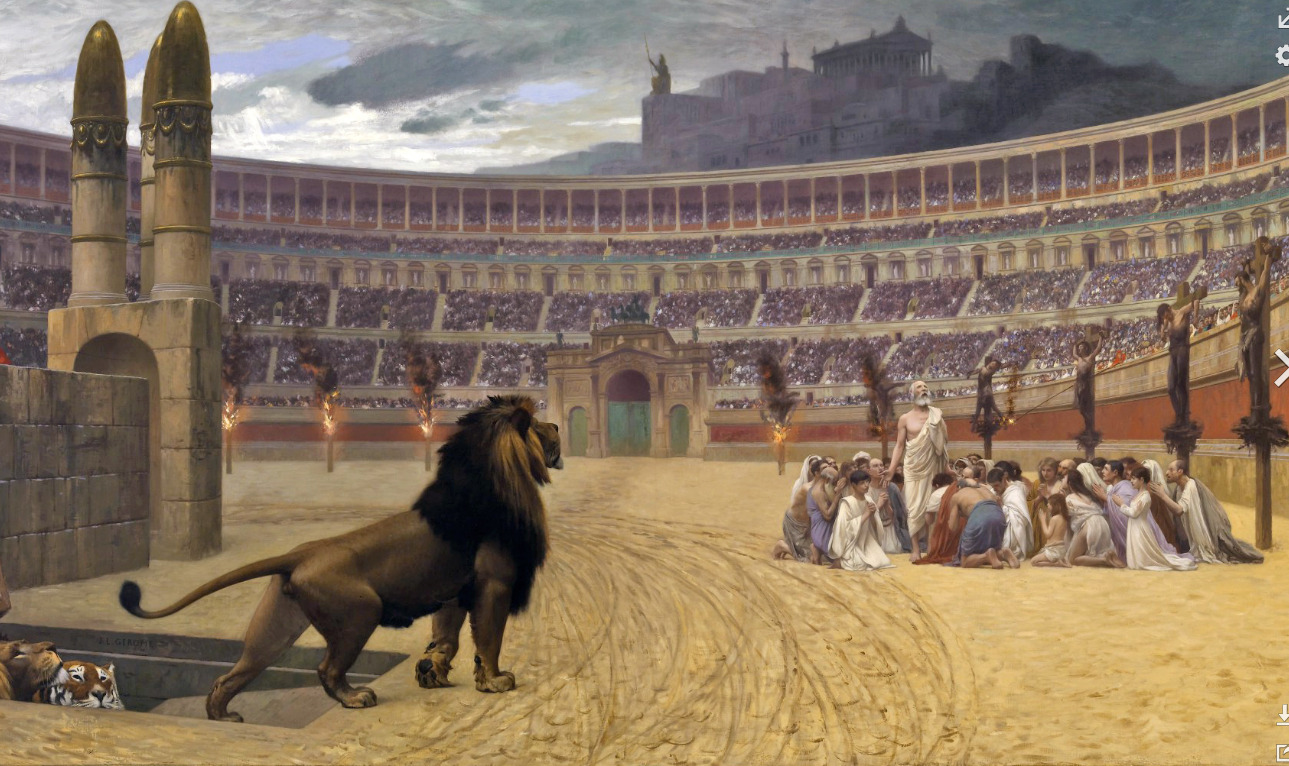 Persecution in the First Centuries

When Jesus revealed to His disciples the fate of Jerusalem and the scenes of the second advent, He foretold also the experience of His people from the time when He should be taken from them, to His return in power and glory for their deliverance. From Olives the Saviour be-held the storms about to fall upon the apostolic church, and, penetrating deeper into the future, His eye discerned the fierce, wasting tempests that were to beat upon His fol-lowers in the coming ages of darkness and persecution.In a few brief utterances, of awful significance, He foretold the portion which the rulers of this world would mete out to the church of God. The followers of Christ must tread the same path of humiliation, reproach, and suffering which their Master trod. The enmity that burst forth against the world’s Redeemer, would be manifested against all who should believe on His name.The history of the early church testified to the fulfillment of the Saviour’s words. The powers of earth and hell arrayed themselves against Christ in the person of His followers. Paganism foresaw that should the gospel triumph,her temples and altars would be swept away; therefore she summoned her forces to destroy Christianity. The fires of persecution were kindled. Christians were stripped of their possessions, and driven from their homes. They “endured a great fight of afflictions.” They “had trial of cruel mockings and scourgings, yea, moreover of bonds and imprisonment.”Hebrews 11:36.

Great numbers sealed their testimony with their blood. Noble and slave, rich and poor, learned and ignorant, were alike slain without mercy.Wherever they sought refuge, the followers of Christ were hunted like beasts of prey. They were forced to seek concealment in desolate and solitary places. “Destitute, afflicted, tormented, of whom the world was not worthy, they wandered in deserts, and in mountains, and in dens and caves of the earth.” Hebrews 11:37, 38. The subterranean excavations connected with the city of Rome afforded shelter for thousands. Long galleries had been tunneled through earth and rock to procure material for the vast structures of the capital, and the dark and intricate network of passages ex-tended for miles beyond the walls. In these underground re-treats, many of the followers of Christ, when suspected and proscribed, found a home; and here also they buried their dead. When the Lifegiver shall awaken those who have fought the good fight, many a martyr for Christ’s sake will come forth from those gloomy caverns.Under the fiercest persecution, these witnesses for Jesus kept their faith unsullied. Though deprived of every comfort, shut away from the light of the sun, making their home in the dark but friendly bosom of the earth, they uttered no complaint. With words of faith, patience, and hope,they encouraged one another to endure privation and dis-tress. The loss of every earthly blessing could not force them to renounce their belief in Christ. Trials and persecutions were but steps bringing them nearer their rest and their re-ward.They called to mind the words of their Master, that when persecuted for Christ’s sake they were to be exceeding glad; for great would be their reward in Heaven;for so had the prophets been persecuted before them. Like God’s servants of old, they were “tortured, not accepting deliverance, that they might obtain a better resurrection.”Hebrews 11:35. They rejoiced that they were accounted worthy to suffer for the truth, and songs of triumph ascended in the midst of crackling flames. Looking upward by faith, they saw Christ and angels leaning over the battlements of Heaven,gazing upon them with the deepest interest, and regarding their steadfastness with approval. A voice came down to them from the throne of God, “Be thou faithful unto death, and I will give thee a crown of life.” Revelation 2:10.In vain were Satan’s efforts to destroy the church of Christ by violence. The great controversy in which the disciples of Jesus yielded up their lives did not cease when these faithful standard-bearers fell at their post. By defeat they conquered. God’s workmen were slain, but His work went steadily forward. The gospel continued to spread, and the number of its adherents to increase. It penetrated into regions that were inaccessible, even to the eagles of Rome.Said a Christian, expostulating with the heathen rulers who were urging forward the persecution:

“You may torment, afflict, and vex us. Your wickedness puts our weakness to the test, but your cruelty is of no avail. It is but a stronger invitation to bring others to our persuasion. The more we are mowed down, the more we spring up again. The blood of the Christians is seed.”

The Mystery of Iniquity

“Ye shall be betrayed both by parents, and brethren, and kinsfolks, and friends; and some of you shall they cause to be put to death. And ye shall be hated of all men for my name’s sake.” Luke 21:16, 17.


Sources:
CHAPTER SUPPLEMENT: THE MYSTERY OF INIQUITY “Let no man deceive you by any means; for that day shall not come,except there come a falling away first, and that man of sin be revealed, theson of perdition; who opposeth and exalteth himself above all that is calledGod, or that is worshipped; so that he as God sitteth in the temple of God,shewing himself that he is God.“Remember ye not, that, when I was yet with you, I told you thesethings? And now ye know what withholdeth that he might be revealed in histime. For the mystery of iniquity doth already work.” 2 Thessalonians2:3-7.

“Let no man deceive you by any means: for that day [the second ad-vent of Christ] shall not come, except there come a falling away first, and that man of sin be revealed, the son of perdition; who opposeth and exalteth himself above all that is called God, or that is worshipped; so that he as God sitteth in the temple of God, shewing himself that he is God.” 2 Thessalonians 2:3-4. “Then shall they deliver you up to be afflicted, and shall kill you, and ye shall be hated of all nations for My name’s sake.” Matthew 24:9.“Take heed therefore unto yourselves, and to all the flock, . . For I know this: that after my departing shall grievous wolves enter in among you, not sparing the flock. Also of your own selves shall men arise, speaking per-verse things, to draw away disciples after them. Therefore watch and re-member.” Acts 20:28-31.“For then shall be great tribulation, such as was not since the beginning of the world to this time, no, nor ever shall be. But pray ye that your flight be not in the winter, neither on the Sabbath day.”—Matt 24:21, 20.