Home Articles Revelation 6-7: New insight into the different time periods and the challenges... 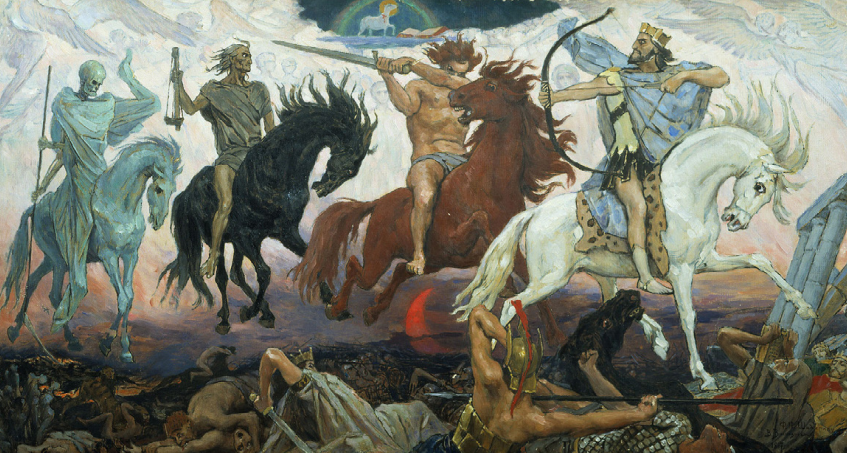 In Revelation 6-7 we get insight things that would take place from the time of John and until Christ returns. This time we get new
information, and more details of the different time eras. Again we are presented with the number seven just as it was seven churches, we now
have seven seals. The history of the church is repeated and elaborated. The first white horse represents the first clean church that was undefiled
and that brought the gospel unto the world. It represented the eagerness of the disciples and the first Christians.
The next horse is red which indicated a loss of innocence. Red in the bible is a symbol of sin. Deceptions and worldliness are pressing way
into the church. The church is morally defiled, it has been infected with sin. This made it vulnerable to what was about to happen. The third horse was black. The opposite of white. The church goes into a time of moral darkness and delusion. Paganism and Christianity have been unified, the Roman Empire and Christians together have become a new religion. Superstition and philosophy, pagan rituals and practices have replaced the pure truth. It says the horseman on the black horse has a measuring weight which symbolizes authority. Christianity has mixed with worldly power spite the fact that Jesus had said his kingdom wasn’t of this world. The emperors from Constantine to Justinian make laws for the Christians, unified church, and state and even became leaders over the progress of the church. Their allies among the Christians got lucrative leading positions. The next horse is pale. It illustrates death. The church is about to die spiritually. The emperor Justinian gives the bishop in Rome authority to rule and those among God’s people who try to be faithful to the truth is

persecuted, claimed to be heretics, killed and punished in many ways. They are now hunted pray and brought to silence. This period of the
Christian history is so hard for the true believers that extremely few are left and most are devoured and suppressed by this power. One example
is the church in Ireland and Scotland that long persevered Gods commandments and the faith in Jesus. But even they were conquered. Those who resisted were even ‘converted’ after their death by the Catholic Church. Historical falsification, power, and brutality almost wiped out God’s faithful wherever they were. In the case of Ireland and Scotland, the Catholic Church wrote that they had been wild pagans whom they brought to the gospel, while the truth was something entirely different. The true worshipers were almost wiped out in real life and lied about the history book by faithful Catholics. The fifth seal is opened. The first four were horses. Not the fifth. Here we see an illustration or the aftermath of the horses. Many righteous people have been slain. They cry out to God these words: HOW LONG? They want to know how long this terrible time will continue where they will be subdued and be killed by this deceptive power who claim to be Christ followers. The cry out for God to reveal to them the time. And God answers their prayer when we see Him giving the time it will last at a later repeating prophecy. This time period of suppression is also mentioned in Daniel:

“and they shall be given into his hand until a time and times and the dividing of time.» (7:25)

And this same time period will be mentioned again several times in Revelation. From the fifth seal, we learn that it’s the suppressed among God’s people that are crying out to hear the time. The sixth seal is opened and we learn of several end time signs and for-warnings that precedes Christ coming. The deliverance is near but before there will be a lot of shaking. We are shown those who are saved, the unbroken line that has continued since the time of John and until the very end. They are not the only ones to be saved, as we also see a great multitude from all over the world. But the 144 000 is from what is called Israel, sealed and then a great multitude large to be counted added to their number. While everyone who wants to follow God’s commandments and have the faith of Jesus will be saved, the multitude comes from different backgrounds. “After this I beheld, and, lo, a great multitude, which no man could number, of all nations, and kindreds, and people, and tongues, stood before the throne, and before the Lamb,
clothed with white robes, and palms in their hands» (Rev.7:9) They do not have truth and have not been part of God’s chosen
light-bearers who were undefiled by the corrupted churches. Although they haven’t understood everything right they have followed the light
that they had. It says about the 144 000:

In the bible churches and even Judah and Israel was called women. Even the 144 000 are compared to a woman when they are called a virgin. If the Bible continues it’s symbolic expression it means that their doctrines are pure, that they have not allowed the harlot and her daughters to corrupt
their understanding or their religious practices. They have a pure truth unfalsified. They are God’s chosen light-bearers in the end times, clean.
The connection with the tribe of Israel shows us that the 144 000 are those light bearers that are a continuation from the time of Christ. They are not part of unconverted Israel, but of the line that has stayed true and listened whenever God directed them and rebuked them. We see in this scene the great multitude together with the 144 000. Everyone cheers and shouts with joy over being saved and they worship the Lord. It’s a feast in heaven. And in the seventh seal, we see silence in heaven for half an hour. Jesus has even more details to give to His people. Till now He has given them the advice on how to handle the changes that would take place in the churches and what they had to do to remain faithful (7 Churches). They have received an insight in the future and how the church would go from white to red, to black and pale unto death and how they would be persecuted by others also calling themselves Christians who were in power. They see signs of Christ coming and that God will seal His faithful. They are comforted. (7 Seals)