Home Articles Revelation 15-16: God sends plagues over His enemies that are subduing His... 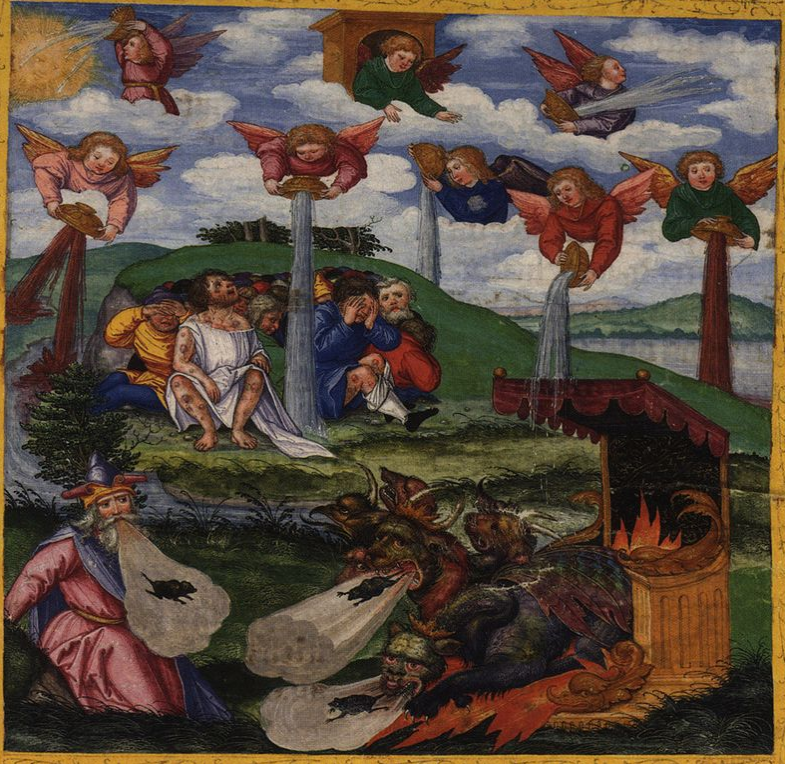 We then reach chapters 15 and 16. God has just explained how those who worship the image and take the mark will:

“drink of the wine of the wrath of God, which is poured out without mixture into the cup of his indignation» (14:10)

Now we are told what is in this cup, punishments that God will send over the beast from the sea and the beast from the
earth and unto all who follow their lead. These punishments show how serious their actions against Christ and His people are considered in the eyes of the heavenly world. Just like they have accused God’s people of not following the lead of the majority and subjecting themselves to the governments of the world, God turns the tables and question why the governments of the world and people refuses to follow the laws of God like the rest of the Universe. The angel says about these punishments:

«Reward her even as she rewarded you, and double unto her double according to her works: in the cup which she hath filled fill to her double. How much she hath glorified herself, and lived deliciously, so much torment and sorrow give her: for she saith in her heart, I sit a queen, and am no widow, and shall see no sorrow. Therefore shall her plagues come in one day, death, and mourning, and famine; and she shall be utterly burned with fire: for strong is the Lord God who judgeth her.» (Rev 18:6-8)

Claiming to represent Christ while furthering the devil’s agenda and trying to eliminate God’s real people is a serious crime, the worst of them all. The vision John receives of the punishment is given to show God’s people who have to go through this tribulation and how God will preserve them by fighting their and His enemies. In this way, God’s people can pay attention to the last time period in the history of this world and know, spite all that takes place, during the plagues, that God is doing it to protect them and that Jesus is on His way. When someone has pressured you so hard that you have been denied the right to buy and sell and in the end even told that you will die because of your faith, it is a relief to see the plagues described in Revelation 16 come, keeping the enemy busy. It can be compared to when God gave plagues over Egypt.
Pharaoh refused to let the people go and worship God and so he placed heavy burdens on the people. But when the plagues came they were temperately hindered from continuing their actions and had to focus on surviving their plagues. This relieved God’s people from the Egyptian sword and prepared them mentally for their exit from Egypt.
The beast in Revelation 13 wanted to refuse food and a living for those who are true to God. (13:17) Now God gives back what they gave and He takes these privileges from them instead. The lack of clean water and heat will make them fight for survival. It will be a great tribulation because being in want will open up for people committing terrible crimes. Before we see the different plagues in Revelation 16, chapter 15 shows us that the temple in heaven is opened and the tabernacle of the testimony there. (15:5) The testimony was the ten commandments and the Ark was called the Ark of the Testimony. (Exo.25:21; 30:6) We have just been told that God’s people who will refuse to take the mark of the beast are also they who keep the commandments of God. The plagues that are sent over the beast and its followers come from the sanctuary. It means that it is the law in the tabernacle that has judged them. Usually, the blood on the Mercy Seat over the law would protect the law-breaker and so when it doesn’t at this time, it means that they are not protected by Christ blood, by the priestly service, and this is why the law condemns them and judges them. When the mercy in the blood is removed and the Ark opened the law in there will judge those who oppose it. It will not be a good day to be the pope who has convinced billions worldwide to keep his version of the law instead of God’s.
In the sanctuary service when the High Priest went into the holiest and the tabernacle of the testimony was opened, and the blood was placed over the law, God’s people were instructed to humble themselves or they would be separated from God’s people. Meaning only those who had repented and taken part in God’s instruction would be blessed by the blood on the day of judgment, the rest would be separated on that very same day.

“For whatsoever soul it is that shall not be afflicted in that
same day, he shall be cut off from among his people.»
(Lev 23:29)

The affliction meant they had to actually have repented for breaking God’s law. Then the blood would cover their sin. But if they refused God’s atonement they would be cut off, separated. In the same way, the door to Noah’s ark was closed seven days before the rain started. Here we see a door of mercy closing for the world and seven plagues coming over them before Christ returns. Just like the plagues in Egypt tied to their idol worship, we can see symbolism in the plagues that come over the beast and their followers. The first is gruesome sore which the law has an interesting say in. Those who had sores like these were to be separated from the rest of the people and considered unclean. (Lev.13-15) The second plague turns the sea to become blood and the third all the rivers and the fountains. Christ said they were to come to Him for the living water, but they had rejected His offer. They also blocked the way for others to come to the ‘living water’. It says:

“ art righteous, O Lord, which art, and wast, and shalt be, because thou hast judged thus. For they have shed the blood of saints and prophets, and thou hast given them blood to drink; for they are worthy.» (Rev.15:5-6)

The fourth angel makes the sun sting and burns them. The corrupted Church had since its beginning mixed the old pagan sun worship with Christianity. The sun symbols were everywhere in the churches and even the creator’s sabbath was rejected for the sake of the old sun worship day. Now the sun itself turns against them. God’s promise to His faithful is the opposite:

The fifth plague is darkness:

«And the fifth angel poured out his vial upon the seat of the beast; and his kingdom was full of darkness».

Again God gives what they give. Jesus came as the light of the world, yet they had turned the light into darkness. They had stepped between Christ and man, hindering the light from shining in its true light. They have given darkness to the world, and God gives them darkness in return. In the sixth plague we see how the beasts are still fighting together with the dragon and now the kings of the east are coming up against them. at a place called Armageddon. They claimed to be the disciples of peace yet they are in reality those who provoke all the wars. The seventh plague is an earthquake and hail followed by Christ’s final judgment at his return. It says:

«And the beast was taken, and with him the false prophet that wrought miracles before him, with which he deceived them that had received the mark of the beast, and them that worshipped his image. These both were cast alive into a lake of fire burning with brimstone.» (Rev 19:20)

Here we see the beast cast alive into the lake of fire. We already know from the angel’s explanations to Daniel’s dreams that a beast represents a government. And so it’s a governmental beast that is destroyed. This fits with Daniel’s description of the rock hitting the statue representing the line of kingdoms that would last from Babylon and until Christ second coming. When it says the beast is cast into the fire «alive» it means that it is still in existence until the very end. The persecuting will continue until Christ interrupt them. Judt like pharao, the plagues have not turned them away from their desire to control God’s people and to oppose God Himself.