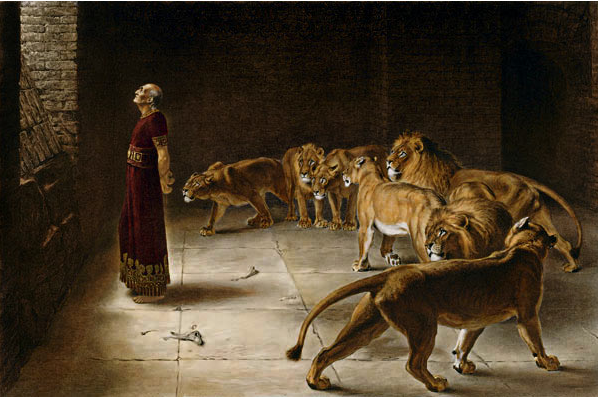 (This Bible commentary was written in the 19th century after extensive research by Christians who believed in Christ and keep God’s commandments (Rev.12,17;14,12). Written by U.Smith)

That the book of Daniel was written by the person whose name it bears, there is no reason to doubt. Ezekiel, who was contemporary with Daniel, bears testimony, through the spirit of prophecy, to his piety and uprightness, ranking him in this respect with Noah and Job:

“Or if I send a pestilence into that land, and pour out my fury upon it in blood, to cut off from it man and beast; though Noah, Daniel, and Job were in it, as I live, saith the Lord God, they shall deliver neither son nor daughter; they shall but deliver their own souls by their righteousness.” Eze.14:19,20.

His wisdom, also, even at that early day, had become proverbial, as appears from the same writer. To the prince of Tyrus he was directed by the Lord to say, “Behold, thou art wiser than Daniel; there is no secret that they can hide from thee.” Eze.28:3. But above all, our Lord recognized him as a prophet of God, and bade his disciples understand the predictions given through him for the benefit of his church:

“When ye therefore shall see the abomination of desolation, spoken of by Daniel the prophet, stand in the holy place (whoso readeth, let him understand), then let them which be in Judea flee into the mountains.” Matt.24:15,16.

Though we have a more minute account of his early life is recorded of that of any other prophet, yet his birth and lineage are left in complete obscurity, except that he was of the royal line, probably of the house of David, which had at this time become very numerous. He first appears as one of the noble captives of Judah, in the first year of Nebuchadnezzar, king of Babylon, at the commencement of the seventy years’ captivity, B.C.606. Jeremiah and Habakkuk were yet uttering their prophecies. Ezekiel commenced soon after, and a little later, Obadiah; but both these finished their work years before the close of the long and brilliant career of Daniel. Three prophets only succeeded him, Haggai and Zechariah, who exercised the prophetic office for a brief period contemporaneously, B.C.520 – 518, and Malachi, the last of the Old Testament prophets, who flourished a little season about B.C.397. During the seventy years’ captivity of the Jews, B.C.606 – 536, predicted by Jeremiah (Jer.25:11), Daniel resided at the court of Babylon, most of the time prime minister of that brilliant monarchy. His life affords a most impressive lesson of the importance and advantage of maintaining from earliest youth strict integrity toward God, and furnishes a notable instance of a man’s maintaining eminent piety, and faithfully discharging all the duties that pertain to the service of God, while at the same time engaging in the most stirring activities, and bearing the weightiest cares and responsibilities that can devolve upon men in this earthly life.

What a rebuke is his course to many at the present day, who, having not a hundredth part of the cares to absorb their time and engross their attention that he had, yet plead as an excuse for their almost utter neglect of Christian duties, that they have no time for them. What will the God of Daniel say to such, when he comes to reward his servants impartially, according to their improvement or neglect of the opportunities offered them? But it is not alone nor chiefly his connection with the Chaldean monarchy, the glory of kingdoms, that perpetuates the memory of Daniel, and covers his name with honor. From the height of its he saw that kingdom decline, and pass into other hands. Its period of greatest prosperity was embraced within the limits of the lifetime of one man. So brief was its supremacy, so transient its glory. But Daniel was with more enduring honors. While beloved and honored by the princes and potentates of Babylon, he enjoyed an infinitely higher exaltation, in being beloved and honored by God and his holy angels, and admitted to a knowledge of the counsels of the .

His prophecy is, in many respects, the most remarkable of any in the sacred record. It is the most comprehensive. It was the first prophecy giving a consecutive history of the world from that time to the end. It located the most of its predictions within well-defined prophetic periods, though reaching many centuries into the future. It gave the first definite chronological prophecy of the coming of the Messiah. It marked the time of this event so definitely that the Jews forbid any attempt to interpret its numbers, since that prophecy shows them to be without excuse in rejecting Christ; and so accurately had its minute and literal predictions been fulfilled down to the time of Porphyry, A.D.250, that he declared (the only loophole he could devise for his hard-pressed skepticism) that the predictions were not written in the age of Babylon, but after the events themselves had transpired. This shift, however, is not now available; for every succeeding century has borne additional evidence to the truthfulness of the prophecy, and we are just now, in our own day, approaching the climax of its . The personal history of Daniel reaches to a date a few years subsequent to the subversion of the Babylonian kingdom by the Medes and Persians. He is supposed to have died at Shushan, or Susa, in Persia, about the year B.C.530, aged nearly ninety- four years; his age the probable reason why he returned not to Judea with other Hebrew captives, under the proclamation of Cyrus (Ezra 1:1), B.C.536, which marked the close of the seventy years’ captivity.